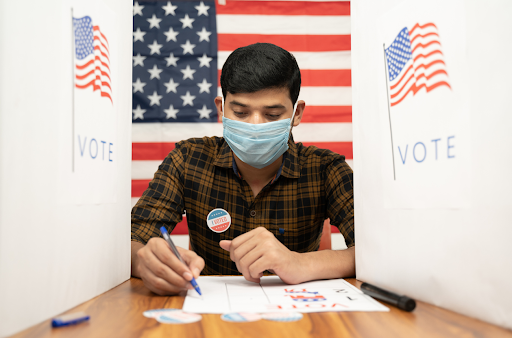 Hispanic Voter #2 by N/A is licensed under AZ GOP N/A
Republican National Committee Chairwoman Ronna McDaniel believes that Latinos will be a core factor in determining the outcome of the 2022 midterm elections, and she says the "sustained investment" the party has made in that community over the past two years will help secure a record number of Hispanic votes in November.

McDaniel spoke with the Washington Examiner for an exclusive interview, in which she detailed the 21 Hispanic community centers the GOP has opened across the country since the 2020 election.

"These are centers where we're engaging, getting to know people, introducing people who've been habitual Democrat voters to the Republican Party, and with this long-term investment, we have said, 'We are here to earn your vote,'" she said. "We want to have a conversation about how our party can better represent your community, and it's really resonating, and we have a record number of Hispanic candidates, and I think you're seeing the growth that's going to help us win in states like Nevada and Arizona this cycle."

According to the Pew Research Center, 34.5 million Hispanic Americans will be eligible to vote in 2022, up more than 4.7 million compared to the prior election and accounting for 62% of all new eligible voters ahead of the midterm elections. Polling shows that, like other demographics and the country as a whole, the economy remains by far the top issue for Hispanic voters.

While half say they plan to continue voting for Democratic candidates, 28% say they will vote Republican, a significantly higher rate than the GOP has secured in elections past. 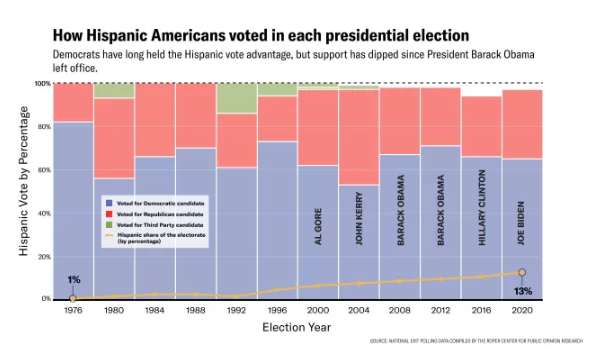 McDaniel believes Latinos' shift to the right has to do with how the party is now approaching the community.

"We used to do really well with Venezuelan and Cuban voters," she said, noting when asked about the GOP's anti-communist rhetoric. "But now, we've expanded, and it's Colombian and Mexican and other Hispanic voters, and I think the key for the Republican Party is we have not treated the Hispanic community in a monolithic way."

McDaniel brought up first lady Jill Biden's San Antonio remarks in July that the Latino community was “as unique as the breakfast tacos” in the city as an example of how the Democrats have been out of touch. Biden later apologized for the remark.

"We're going to the voters as individuals, and we're talking to them, as families and as business owners and, really, by having the sustained engagement," McDaniel said. "We're seeing growth in our party with Hispanic voters, because we are addressing those issues to the individual and not treating people as if they're just one voting bloc with no diversity, which you've seen the Democrats do with terms like Latinx or Jill Biden calling them the same as breakfast burritos."

Furthermore, Republicans are not only diversifying their outreach efforts, but also their candidates. There are a record number of Hispanic Republicans running for national office in 2022. Rep. Mayra Flores (R-TX), the first female, Mexican-born member of the House of Representatives, won a special election this past year to flip Texas's 34th Congressional District red, and McDaniel pointed to Cassy Garcia (R-TX), Juan Ciscomani (R-AZ), Monica De La Cruz (R-TX), and Laurie Chavez-DeRemer (R-OR) as similar potential pickups for the party.

Like the economy, immigration remains a core issue for Hispanic voters on both sides of the aisle. The Biden administration and national Democrats have, in recent weeks, begun framing the situation at the southern border as extending help to people fleeing communism in Venezuela and Cuba.

This new approach takes a page out of the GOP playbook. Cuban Americans in South Florida provided a massive boost to the GOP in the 2020 election, thanks in large part to the anti-communist message frequently touted by former President Donald Trump and other Republicans, but McDaniel doesn't think the Democrats' shift will cut into the Republicans' headway with Latinos.

"I don't think anybody likes illegal immigration, especially Hispanic voters. We need some stability in our immigration process in this country, and I think when you're seeing these big gains in the Rio Grande Valley with candidates like Mayra Flores and Monica De La Cruz, they're understanding what this influx means to their communities without any border security," she told the Washington Examiner. "Of course, we want to bring people into our country, the legal way, who want to work hard and love this country, as many of these people have come in, like Mayra and Monica De La Cruz. But having these open borders isn't good for anybody, especially the people who are making these treacherous crossings."

"This isn't a humane process at all," McDaniel added. "I think the Hispanic community is acutely aware of the failures of the Biden administration on every level, especially the humanitarian level."