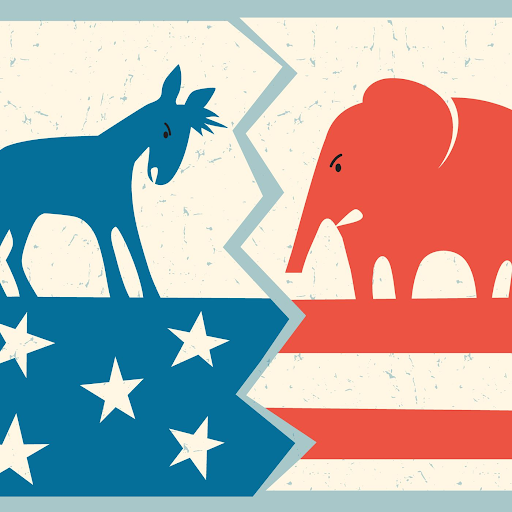 Versus by N/A is licensed under AZ GOP N/A
With elections next month, independents, especially women, are swinging to the G.O.P. despite Democrats’ focus on abortion rights. Disapproval of President Biden seems to be hurting his party.

Republicans enter the final weeks of the contest for control of Congress with a narrow but distinctive advantage as the economy and inflation have surged as the dominant concerns, giving the party momentum to take back power from Democrats in next month’s midterm elections, a New York Times/Siena College poll has found.

The poll shows that 49 percent of likely voters said they planned to vote for a Republican to represent them in Congress on Nov. 8, compared with 45 percent who planned to vote for a Democrat. The result represents an improvement for Republicans since September, when Democrats held a one-point edge among likely voters in the last Times/Siena poll. (The October poll’s unrounded margin is closer to three points, not the four points that the rounded figures imply.)

With inflation unrelenting and the stock market steadily on the decline, the share of likely voters who said economic concerns were the most important issues facing America has leaped since July, to 44 percent from 36 percent — far higher than any other issue. And voters most concerned with the economy favored Republicans overwhelmingly, by more than a two-to-one margin. 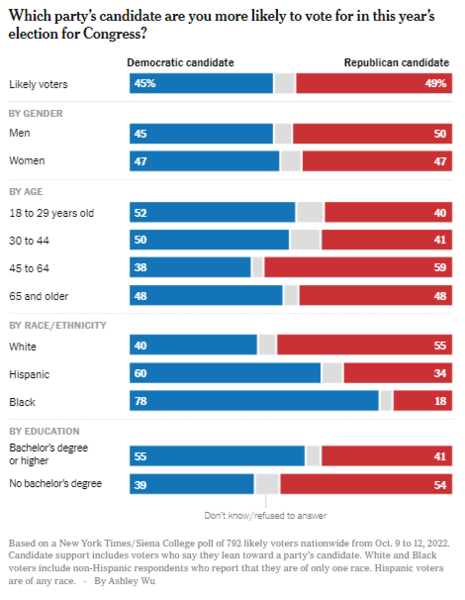 Both Democrats and Republicans have largely coalesced behind their own party’s congressional candidates. But the poll showed that Republicans opened up a 10-percentage point lead among crucial independent voters, compared with a three-point edge for Democrats in September, as undecided voters moved toward Republicans.

The biggest shift came from women who identified as independent voters. In September, they favored Democrats by 14 points. Now, independent women backed Republicans by 18 points — a striking swing given the polarization of the American electorate and how intensely Democrats have focused on that group and on the threat Republicans pose to abortion rights.

The survey showed that the economy remained a far more potent political issue in 2022 than abortion.

“I’m shifting more towards Republican because I feel like they’re more geared towards business,” said Robin Ackerman, a 37-year-old Democrat and mortgage loan officer who lives in New Castle, Del., and is planning to vote Republican this fall.

Ms. Ackerman said she disagreed “1,000 percent” with the Supreme Court’s decision to overturn Roe v. Wade and erase the national right to an abortion. “But that doesn’t really have a lot to do with my decision,” she said of her fall vote. “I’m more worried about other things.”

The first midterm election of a presidency has been historically challenging for the party in power, and Democrats are approaching this one saddled with a president who has a disapproval rating of 58 percent, including 63 percent of independent voters.

Democrats have no margin for error in 2022 — with the slimmest of majorities in the House and a 50-50 Senate, where the flipping of a single seat in that chamber would deliver a Republican majority. Republicans have vowed to curb President Biden’s agenda and launch a series of investigations into his administration and family if they take charge of either the House or Senate.

The added challenge for Democrats is the intensity of the electorate’s displeasure with the president: The poll showed that 45 percent of likely voters strongly disapproved of the job that Mr. Biden was doing, and 90 percent of those voters planned to back a Republican for Congress this fall.

Democrats were actually pulling in the support of 50 percent of voters who said they “somewhat disapprove” of Mr. Biden. That is good news for Democrats — for now.

It is also a perilous position to be in, because those voters are ripe to be won over by Republicans who are unleashing millions of dollars in ads to link Democratic candidates to an unpopular president.

The issues that mattered most to voters aligned heavily with partisan preferences. Voters who were focused on the economy and inflation favored Republicans over Democrats 64 percent to 30 percent. Democrats held a 20-percentage-point advantage among voters who cared the most about any other issue.

The economy was the most pressing issue for voters in both the July poll and now. The challenge for Democrats is that the share of voters focused on economic matters is bigger now.

“It’s all about cost,” said Gerard Lamoureux, a 51-year-old Democratic retiree in Newtown, Conn., who is planning to vote Republican this fall. “The price of gas and groceries are through the roof. And I want to eat healthy, but it’s cheaper for me to go to McDonald’s and get a little meal than it is to cook dinner.”

Mr. Biden has repeatedly tried to put a positive spin on the economy and has noted that inflation is a worldwide problem. “Our economy is strong as hell,” he said Saturday at a stop at a Baskin-Robbins ice cream shop in Portland, Ore.

Back in July, in the wake of shootings in Uvalde, Texas, and Highland Park, Ill., and the passage of the first gun legislation in decades in Congress, 9 percent of likely voters named guns as the top issue. But that number collapsed to 1 percent by October — dropping from a virtual tie for third as the most important issue to outside the top 10. The vast majority of voters who named guns as the top issue over the summer said they preferred Democratic control of Congress.

While the share of voters focused on guns declined, those who identified abortion as the top issue remained flat, at 5 percent. There is a sizable gender split on the issue’s significance: 9 percent of women rated it as the top issue compared with just 1 percent of men.

The poll was the latest evidence of the growing class divide between the two parties, in terms of both Mr. Biden’s standing and the race for Congress. Mr. Biden’s base of support is increasingly shrinking to urban, well-educated enclaves, with Black voters, city dwellers and those with at least a bachelor’s degree among the few demographic groups where a plurality of likely voters think he is doing well.

Among likely Hispanic voters, a narrow 48 percent plurality disapproved of Mr. Biden even as 60 percent said they would vote for congressional Democrats this fall — one of a few groups, including younger voters, who appeared to separate their frustration with the White House from their voting plans.

In taking over the House in 2018 and winning the Senate and White House in 2020, the winning Democratic coalition during the Trump presidency relied on a significant gender gap and on winning women by a wide margin.

But the poll showed that Republicans had entirely erased what had been an 11-point edge for Democrats among women last month in 2022 congressional races to a statistical tie in October.

In a hypothetical 2024 rematch, Mr. Trump led Mr. Biden in the poll by one percentage point. Among women, Mr. Biden was ahead of Mr. Trump by only four points, compared with the margin of more than 10 points that Mr. Biden had in the 2020 election, according to studies of the national electorate for that election.

Today, the mood of the nation is decidedly sour. A strong majority of likely voters, 64 percent, sees the country as moving in the wrong direction, compared with just 24 percent who see the nation as on the right track. Even the share of Democratic likely voters who believe the nation is headed in the right direction fell by six percentage points since September, though it is above the low point of the summer.

“Everybody’s hurting right now,” said David Neiheisel, a 48-year-old insurance salesman and Republican in Indianapolis. “Inflation, interest rates, the cost of gas, the cost of food, the cost of my property taxes, my utilities — I mean, everything’s gone up astronomically, and it’s going to collapse.”

The Times/Siena survey of 792 likely voters nationwide was conducted by telephone using live operators from Oct. 9 to 12, 2022. The margin of sampling error is plus or minus 4.1 percentage points. Cross-tabs and methodology are available here.

Source: New York Times
Versus by N/A is licensed under AZ GOP N/A