Joe Biden Is for Chaos, Not Law and Order 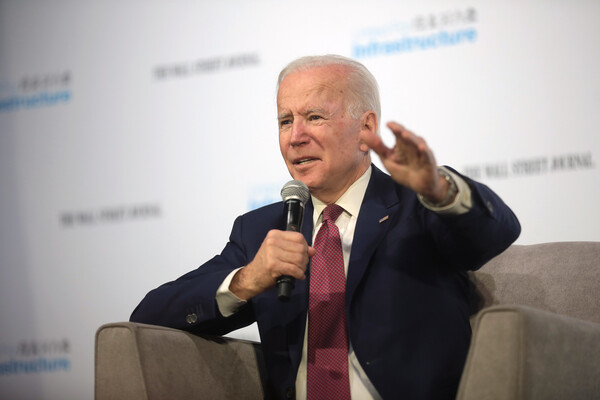 Joe Biden by Gage Skidmore is licensed under flickr CC BY-SA 2.0
Joe Biden’s address at the Democrat National Convention left much to be desired.

While the Democrat nominee proved he can still read off a teleprompter, his speechwriters did him no favors by leaving out of his remarks any real substance on his far-left economic policies, how he would have responded differently to the coronavirus, what steps he would take on criminal justice reform, or how he would prevent his job-killing energy plan from putting millions of Americans out of work.

Another topic he failed to confront was the violence and anarchy occurring across our country in Democrat-run cities.

Recently, in large cities led by Democrat mayors, the answer to the everyday question, “How was your weekend?” is simply “chaotic.” These left-wing mayors have urged law enforcement to stand down in the face of rioters and looters, and their most vulnerable citizens are paying the price.

Sixty-four people were shot, five fatally, in Chicago last weekend. A 12-year-old boy and six teenagers were among the wounded. In New York City, over 40 people were shot between Friday and Sunday morning. Both cities are headed up by mayors who support the anti-police “protests” and have looked the other way as Antifa have destroyed their cities. And despite having some of the strictest gun laws in America, both cities have become the Wild Wild East.

In Portland, Oregon, the protests have continued for more than 80 days. Rioters pelted police officers with rocks, glass bottles, and aimed lasers at officers’ eyes. Two officers were hospitalized. At the same time, dozens of 911 calls went unheeded for such needs as theft, vandalism, hit and runs, stolen cars, etc. When federal officers sought to protect a federal courthouse from arson, local officials criticized and denounced the federal presence.

Joe Biden is trying to say he does not support defunding the police, yet he agreed to “redirecting” funding from law enforcement. Funds that are “redirected” no longer reach the police, which sounds a lot like defunding to me.

Members of Biden’s campaign staff have also donated to the Minnesota Freedom Fund, an organization that helped bail out arrested protesters. Among the people released by the fund are people charged with murder, sex crimes, and other serious violent offenses. Kamala Harris, before she was announced as Biden’s VP pick, promoted the fund along with several Hollywood celebrities.

New York has implemented a “no bail” policy, which has led to extreme frustration in police departments. This “catch and release” policy has them arresting violent protesters one night, only to see them released and out on the streets again the very next night. The Biden–Harris team would presumably implement this at the federal level, sowing nationwide chaos and discord.

We can already see the results of the failed Democrat policies on the municipal level. From May to June this year, in 20 major cities, homicides are up by 37 percent — all during a time of shutdowns due to the COVID-19 pandemic. Worse, 911 calls are being unheeded because our law enforcement officers are being totally overwhelmed. And Democrats want to “divert” more funds from our police?

The Left claims to care for the underprivileged in our society; with defunded police forces, however, the wealthy will be safe in their gated communities, high walls, and private compounds. It is the people in working-class neighborhoods and the vulnerable in our society who will be hurt most by these extreme policies.

No one will be safe in Biden’s America.

Dr. Kelli Ward is a family physician, two-term Arizona state senator, and the chairwoman of the Republican Party of Arizona. On Twitter: @KelliWardAZ.
Source: The American Spectator
Joe Biden by Gage Skidmore is licensed under flickr CC BY-SA 2.0