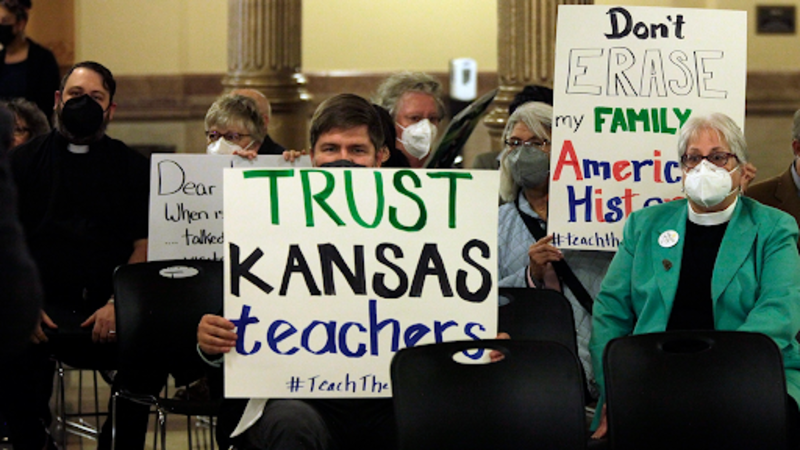 Teachers by N/A is licensed under AZ GOP N/A
Republicans are seizing on the issue of parents’ rights ahead of November, arguing it could swing key Senate and House races toward their party and help them win back power in Congress.

The descriptor covers an array of issues that bubbled to the forefront after the onset of the COVID-19 pandemic, but broadly argues in favor of giving parents a say in their children’s education, including where they attend school, what they are taught and how LGBTQ issues are discussed.

“Parents want education, not indoctrination, and we should expect this movement to have a major impact in the midterm elections. This is one of many issues causing voters to support conservatives — the same people who care about education care about others like inflation and crime,” Jessica Anderson, executive director of the conservative group Heritage Action, said in a statement to The Hill.

Republicans believe Virginia Gov. Glenn Youngkin’s (R) victory last year provides a blueprint for how the issue can propel GOP candidates to success. Youngkin capitalized on frustration over mask mandates and remote learning even after vaccines were widely available, as well as the handling of LGBTQ issues in the classroom, in his campaign to defeat former Gov. Terry McAuliffe (D).

Republicans believe many of those same issues apply to parents across the country and that they can convince voters that Democrats are a party that overreaches and makes decisions that are better left to parents.

“Whether it’s unscientific lockdowns and mask mandates, destructive ideologies, or an open border that’s allowing ‘rainbow’ fentanyl targeting children to pour into our country, Democrats consistently put their special interests first, and our kids suffer for it,” Republican National Committee Chairwoman Ronna McDaniel wrote in an op-ed earlier this month for Newsmax.

Republicans this week seized on legislation put forward by a Virginia state delegate that would make it a crime for parents to not affirm their child’s gender identity. The delegate, Elizabeth Guzman, recently campaigned with Rep. Abigail Spanberger (D-Va.), who is in one of the most closely contested House races on the ballot this November.

Strategists largely agree that the midterms will turn on voters’ views on the economy, with much of the focus on the cost of gas, groceries and other goods. Abortion rights will also likely be a major factor in the wake of the Supreme Court decision overturning Roe v. Wade and some Republicans subsequently pushing for national restrictions on when women can get the procedure.

But parents’ rights are an issue many voters feel strongly about, according to Republican strategists and grassroots activists, and lawmakers have been publicly discussing the topic for months.

House Republicans last November released a proposed “Parents Bill of Rights” that calls for parents to know what is being taught at their kids’ schools, to be aware of budgeting decisions in school districts and to be able to protect their child’s privacy. Rep. Elise Stefanik (N.Y.), a member of House GOP leadership, promoted the proposal on Twitter as recently as last week.

The poll found that roughly one-third of voters listed something other than the economy, inflation or abortion as the most important issue to them heading into November. It also found voters in those states overwhelmingly agreeing with Republicans on the issue of “age-appropriate schooling.”

Sixty-eight percent of those surveyed, including 71 percent of independents, said public schools should not be teaching children younger than the fourth-grade level about sex, sexual preferences or gender identity, and that it should instead be left up to parents to discuss those topics.

“Education and parents’ rights is an important issue this election, just as it was in Virginia last year, and Republican candidates will be victorious, just ask Terry McAuliffe,” Danielle Alvarez, communications director for the Republican National Committee, said in a statement.

Democratic leaders have argued it is Republicans who are overreaching on these issues, specifically those dealing with LGBTQ issues in the classroom. They have condemned legislation passed in Florida that prohibits the discussion of sexual orientation in the classroom as an attack on transgender youth who are already at risk.

There are already signs the issue will linger beyond the midterms and into the 2024 race.

Youngkin is viewed as a possible under-the-radar candidate to run for president, and he has delivered on many of his campaign promises focused on education and parents’ rights.

And former President Trump sought to nationalize the issue during the 2020 election when he railed against the teaching of critical race theory and sought to promote “patriotic education.”

Source: The Hill
Teachers by N/A is licensed under AZ GOP N/A