Democrats’ lead with Hispanic voters is smaller than in 2018, Post-Ipsos poll finds 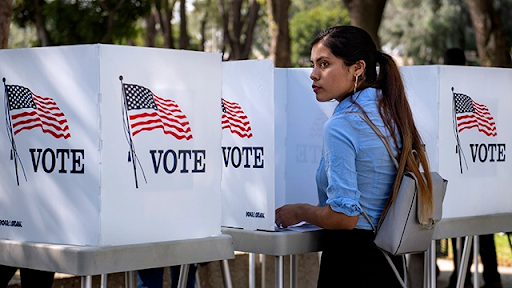 Hispanic Voter by N/A is licensed under AZ GOP N/A
Hispanic voters favor Democrats in November’s congressional elections, but by a smaller margin than four years ago, with inflation concerns and President Biden’s middling approval ratings helping Republicans hold onto gains made in 2020, a Washington Post-Ipsos poll finds.

Hispanic and Latino voters rank rising prices as the most important issue in their midterm vote and are split nearly evenly between trusting Democrats and Republicans to address the issue, with more than 1 in 3 trusting neither party. Democrats lead on most other issues and hold a 28 percentage-point advantage on trust to handle abortion, which Hispanic voters rank as second-most important in their vote.

Overall, the Post-Ipsos poll finds 63 percent of Hispanic registered voters would support Democrats for Congress if the election were held today, while 36 percent support Republicans. Democrats’ 27-point advantage is similar to Biden’s support in 2020 but smaller than Democrats’ roughly 40-point advantages in 2018 and 2016 in exit polls and validated voter surveys. Fully 92 percent of Hispanic Trump voters support Republicans for Congress this year, while 94 percent of Biden voters support Democrats.

A national September Post-ABC News poll found a much tighter race in the generic ballot among registered voters overall, 46 percent for Democrats and 47 percent for Republicans.

Hispanic Americans are the fastest-growing racial or ethnic group in the U.S. electorate according to Pew Research Center estimates, making up 14.3 percent of eligible voters nationwide, including 44 percent in New Mexico, 32 percent in Texas and California, 25 percent in Arizona and 21 percent in Florida.

Democrats receive 63 percent support among Hispanic Catholics, a group that once made up a majority of U.S. Latinos but now represents about 2 in 5 voters. Two growing groups have splintered, with 63 percent of Hispanic evangelical Protestants supporting Republicans while 79 percent of Hispanic voters with no religious affiliation support Democrats.

Democrats hold a 59-point advantage among Latino voters under age 30, though their edge narrows to 12 points among Hispanic voters ages 50 and older, a group that is much more certain about voting this fall. Democrats lead by wide margins in the West, Midwest and Northeast, but their advantage narrows to nine points among those in the South, home to large Hispanic populations in Texas and Florida.

Ernesto Guzman, 53, a self-proclaimed “weak Democrat” from San Diego, said abortion was his No. 1 concern this election. Living in California, he acknowledges that his vote may not “matter too much,” but he has also been urging people to vote for Democratic candidates in his native Texas, where he still has family.

“We’re all Mexican Catholics. I think we all kind of agree … it’s a personal decision,” Guzman said of the decision to have an abortion. “I chafe at the notion that women are being denied access to abortion care and so I basically oppose any politician that would seek to restrict access to that for women.”

Guzman said his votes this year will be more out of protest against Republicans. “I am voting for the lesser of two evils.”

The Post-Ipsos poll finds 53 percent of Hispanic voters approve of Biden’s overall job performance while 46 percent disapprove; notably better than his overall national approval rating in a September Post-ABC poll in which 39 percent of registered voters approved and 55 percent disapproved. Still, the recent poll found a 57 percent majority of Hispanic voters say Biden has accomplished “not very much” or “nothing” since he became president.

Eight in 10 Hispanic voters rate the economy as “not so good” or “poor,” including majorities of Democrats, Republicans and independents. Yet about 6 in 10 say they are optimistic about their personal financial situation, while 4 in 10 are pessimistic.

Diane Soto, 61, of the Bronx, said rising prices were top of mind for her this year. She isn’t seeing her dollar go as far anymore. “It’s like you come out with $200 worth of stuff or whatever and you come out with four bags.” But despite her misgivings about inflation, Soto said she still planned to vote “Democrat all the way up and down” the ballot in November. Protecting abortion rights, Social Security and health care were too important, she said, and she had been scarred since the election of Donald Trump six years ago.

Robert Martinez, 64, had already cast his votes for Republican candidates this year when, on the way back from dropping off his early ballot Monday, he noticed that gas prices had gone up another 6 cents.

“It’s those kinds of things that are fresh in your face that rule the day,” said Martinez, a former Marine who lives in St. Mary’s County, Md. “And this president just does not get it.”

Martinez, whose father is Mexican and whose mother was an immigrant from Lithuania, said inflation and the economic downturn — especially the losses he had noticed in his 401(k) account — were the most important issues to him this year.

Martinez said he would have been open to voting for Democratic candidates but was dismayed that most of them were not openly pushing back on what he called Biden’s actions and inactions. “So that puts them in a negative light for me,” said Martinez, who noted he had voted for Maryland GOP gubernatorial candidate Dan Cox. “Cox has come out and said he disagreed with many of [Biden’s] policies. I just see him more out front and sure of himself whereas his competitors have hunkered down.”

The poll asked which party Hispanic voters trust to handle 12 issues. Democrats’ biggest advantages are on climate change (a 45 percentage point Democratic advantage over Republicans) and LGBTQ issues in both society and public schools (38 points and 36 points, respectively), along with racial discrimination (31 points). Democrats also have a 28-point lead over Republicans on abortion, a 20-point lead on ensuring free and fair elections, a 19-point advantage on gun violence and a 14-point lead on handling public schools overall.

Roughly three-quarters of Hispanic voters (74 percent) say the outcome of November’s election matters “a great deal” or “a good amount” to them personally and just over 6 in 10 say they are absolutely certain to vote.

Hispanic voters who name abortion as their most important issue are more likely to say that they’re certain to vote (75 percent), compared with 60 percent of voters focused most on rising prices and 53 percent voters focused on gun violence.

Republicans have often sought to appeal to socially conservative Latinos on the issue of abortion, though the Post-Ipsos poll shows that the issue is a strength for Democrats among Hispanics.

Tamara Blessing, 45, said abortion is one of the top issues on her mind this election, and she’s feeling encouraged by the Supreme Court’s decision to overturn abortion rights. Blessing said she has long been antiabortion and that issue alone could help sway who she’d support, but she’s also focused on getting inflation down.

“I want to see the prices go down. You go to buy a dozen eggs and they want $7 for them. And, you know, we consume three dozen eggs every two weeks because we have children,” said Blessing, who lives just north of Houston but grew up in Spain.

Still, Blessing said she’s not sure she will be voting in this election. In 2020, Blessing, who identifies as an independent, supported all Republican candidates. But now she’s worried about whether voting matters at all. “I’m very discouraged. I’m kind of debating: Do I vote, do I not vote? Is it going to make a difference?”

Marisa Snapp-Leo, 28, said abortion rights is the top issue on her mind this election, and she will definitely be voting to support Democratic candidates. Snapp-Leo, who lives in Worcester, Mass., and was born in Mexico, became a U.S. citizen three years ago. She shared that she doesn’t have strong feelings about Biden after two years in office.

“I don’t really have a favorable or unfavorable opinion of him at all,” said Snapp-Leo, a scientist. “Republicans tend to blame him, and I think some Democrats will say, ‘Oh, he’s great.’ But I think a lot of us are just very ‘meh’ about him.”

The choice is Democrats “or someone that supports the former president, who from that very first speech called people like me rapists and criminals. I can’t support that,” Snapp-Leo said. “The way Republicans have stationed their party makes it very unlikely for immigrants to be able to side with them.”

Republicans have tried to gain support with Latinos by accusing Democrats of being socialists, particularly with Cuban voters in Florida. The poll finds 57 percent of Hispanic voters have an unfavorable opinion of socialism, including 7 in 10 Hispanic voters ages 50 and older. Nearly half of all Hispanic voters (47 percent) believe socialists have “a great deal” or “a good amount” of influence on the Democratic Party, while 50 percent say socialists have “not very much” or no influence at all.

More than 8 in 10 Hispanic voters say Trump has a significant influence on the Republican Party. The former president is unpopular overall, with 39 percent of Hispanic voters approving of the job he did as president while 61 percent disapprove, including 50 percent who strongly disapprove.

Raul Hernandez, 52, of Fort Lauderdale, Fla., grew up in a Miami household where everyone identified as Republican. He remembers how the first time he went out to vote he and his Cuban American family all backed George H.W. Bush. But now, Hernandez is a registered independent. He said he doesn’t consider himself liberal but he’s “totally anti-Republican.”

Hernandez, who works in IT for Boeing, acknowledged he’s in the minority among his family and in South Florida. “It really bothers me, like a lot of people, especially with older people in Miami, [Republicans] just talk about communism and socialism to scare them. But back it up. Who’s saying they want that? Nobody that I know wants socialism or communism to take place.”

The Washington Post-Ipsos poll was conducted online Sept. 22-Oct. 3 among a random national sample of 1,933 Hispanic adults including 1,088 validated registered voters who were matched to a national voter database. Interviews were conducted in English (81 percent of voters) and Spanish (19 percent). The sample was drawn through the Ipsos KnowledgePanel, an ongoing panel recruited through random sampling of U.S. households. The margin of sampling error among registered voters is plus or minus four percentage points.