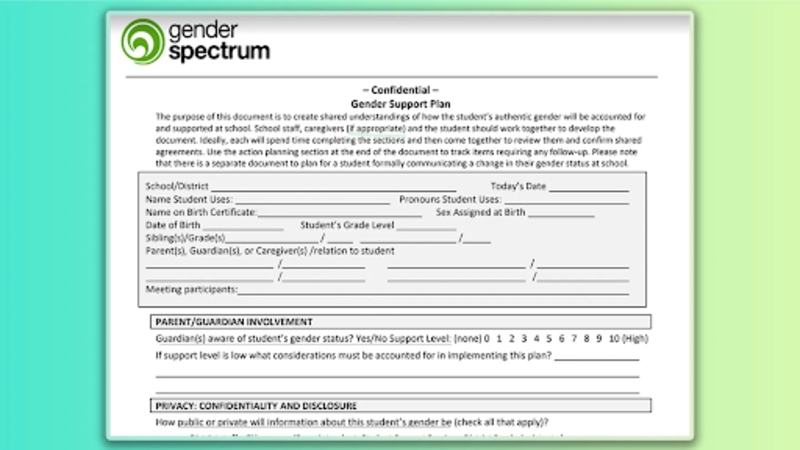 FIRST ON FOX – The Biden Foundation partnered with an organization that provided gender plans that schools can use to conceal a child's social transition from their parents.

In 2019, the Biden Foundation – which said it would champion "progress and prosperity for American families" – launched the "Advance Acceptance" campaign and partnered with Gender Spectrum, an organization involved in promoting gender ideology in the medical field and in K-12 education through professional development.

The Biden Foundation was a 501(c)3 organization active from approximately 2017 until it suspended operations "effective immediately" in 2019, when Joe Biden announced he was running for president. Biden, Dr. Jill Biden and close associates of the commander-in-chief held positions on its board.

During a training on the organization's "Gender Support Plan," the then-director of professional development, Joel Baum, said, "It's very possible that the family will in fact find out about how the young person is being supported in this way. And you… need to have contingencies in place for dealing with that if it does come up." 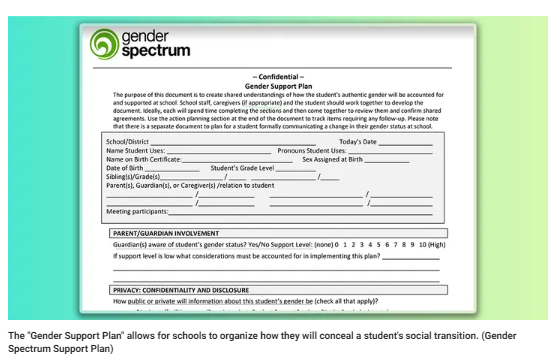 The plan rated the perception of parents' support for a child's transition on a scale from 1-10 and said, "If support level is low what considerations must be accounted for in implementing this plan?"

It also asked how school staff would respond to any questions from the child's parents and also "What are some ways that the student will respond to questions[?]"

"If the student has asserted a degree of privacy, what steps will be taken if that privacy is compromised[?]" the plan said.

Baum said, "If a young person is… asking to be supported in a way that affirms their gender, you need to think seriously about making sure that you're doing that… Whether or not you choose to share that information with the parents really comes down to some of your individual beliefs and expectations." 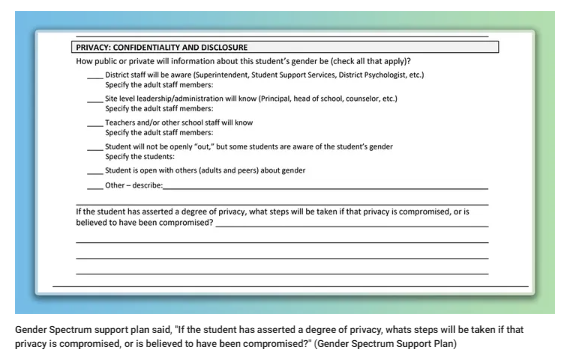 "We recommend that you follow the kids' cue on this. Young people have privacy rights as well and we need to be very, very careful about violating those," Baum said.

Baum is currently a director of education at the Child and Adolescent Center at UCSF's Benioff Children's Hospitals. An automatic reply from his Gender Spectrum email said that he was "no longer working at Gender Spectrum."

Fox News Digital reached out to Baum, Benioff Children's Hospital, and Gender Spectrum but did not immediately receive a response. 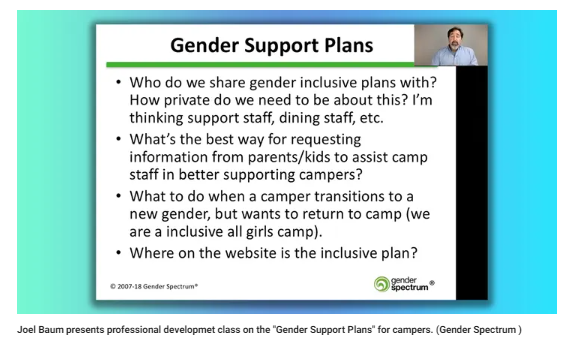 Fox News Digital asked the White House whether the president believes parents have a right to know about their child's social transition in a school but they did not provide comment.

The White House previously met with the ire of parents across the country after Attorney General Merrick Garland directed the FBI to get involved in parents' actions at local school board meetings. The memorandum also referred to parents as "domestic terrorists."

Gender Spectrum was involved in promoting K-12 education curriculum prior to the date of its partnership with the Biden Foundation as well.

For example, the organization has advocated for "gender-inclusive puberty education."

On or about March 2019, the organization released a guide in partnership with GLSEN (formerly the Gay, Lesbian & Straight Education Network), Planned Parenthood and other groups that included "describing the part that different bodies comes with (and their functions) as opposed to connecting those parts to a particular gender."

Gender Spectrum's webpages from 2008 to the present showed that the organization's perspective on family support included using medical transition treatments — such as cross-sex hormones and puberty blockers.

The Biden Foundation has similarly echoed this point of view on social media, blending "affirming" and "supporting" youth with medical intervention.

The Biden Foundation posted on Twitter in October 2018 that "Affirming and supporting a young person's gender identity is critical."

The post included an article praising the American Academy of Pediatrics' policy change in 2018 about taking a "'gender-affirming'… approach that helps children feel safe in society."

In March, the Department of Health and Human Services issued guidance which said that "gender affirming care for minors, when medically appropriate and necessary, improves their physical and mental health."

It added that "Attempts to restrict… [or] falsely characterize this potentially life-saving care as abuse is dangerous."

The psychiatric field has also leaned towards affirmation, defined as "a therapeutic stance that focuses on affirming a patient’s gender identity and does not try to 'repair' it," according to the American Psychiatric Association.

However, not all professionals believe the affirming model is the ideal for all cases.

"There are other ways to treat gender dysphoria," Stella O’Malley, a psychotherapist, previously said.

O’Malley added her belief that children are often "fast-tracked" into the "nuclear option" of drugs and surgeries, according to a Fox News Digital report.

The majority of Americans do not support transgender surgeries or puberty blockers for minors, according to a poll from a conservative nonprofit organization, Fox News Digital reported.

Fifty-six percent of respondents said they would support a ban on puberty blockers, cross-sex hormones, and physical sex-change surgeries for children under 18.

Additionally, the majority of voters do not support teaching topics like gender identity in public schools, according to a New York Times/Siena poll, Fox News Digital previously reported.