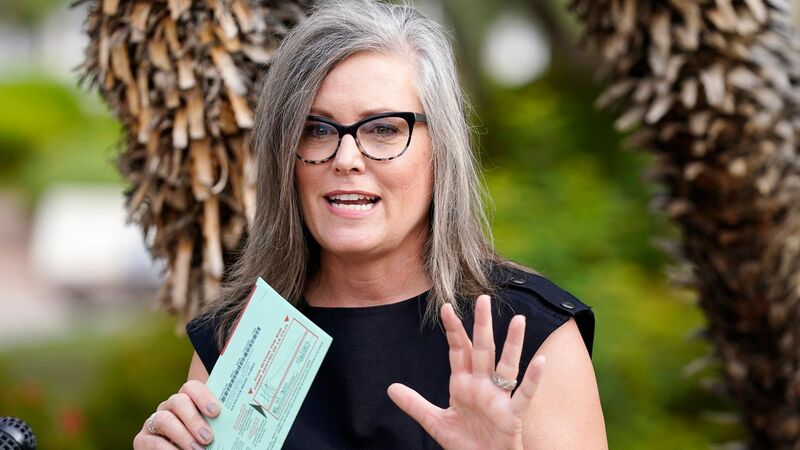 Katie Hobbs primary day voting by N/A is licensed under ROSS D. FRANKLIN/ASSOCIATED PRESS N/A
One lesson from Virginia’s election last year and school board races around the country is that parents want a larger say in the education of their children. That’s bad news for Democrat Katie Hobbs, who is running for Governor in Arizona on a promise to roll back the state’s recent school choice expansion.

A decade ago Arizona pioneered education savings accounts, or ESAs, which let parents spend state dollars for their child’s private school tuition, tutoring, curriculum and other education needs. The program was limited mainly to students with special needs or who attended low-rated public schools, but this year Republicans made it universal.

Now parents can get roughly $7,000 to use as they choose to educate their kids. ESAs are a far greater threat to the teachers union public-school monopoly than the state’s tax credit scholarships, which depend in part on individual and corporate donations and often aren’t enough to cover private tuition. Many charter schools also have long wait lists.

Echoing her union allies, Ms. Hobbs claims in her education plan that Republicans “have moved to expand school vouchers without common-sense measures of accountability, with the clear intent to eventually do away with our local public schools. . . . Vouchers should not have been expanded to provide an unaccountable means of enriching private schools and defunding our local public schools.”

Translation: Parents can’t be trusted with making education decisions, a message unlikely to play well with parents.
Her claim that ESAs “defund” public schools is false. State education dollars follow students, but public schools would continue to get other funding. According to the Goldwater Institute, ESAs this year cost about $6,400 for the typical student, compared to more than $11,000 that state and local taxpayers spend on each public school student. In any case, Gov. Doug Ducey’s budget this year increased K-12 public funding by $1 billion, so the unions have no reason to gripe.

The unions want to lock all students into the public school system they control. They also worry that universal ESAs will increase competition among states. Arizona Republicans have set an example. Will Florida Gov. Ron DeSantis allow himself to be outdone? What about Texas Republicans, who have been slow to embrace private school choice?

Ms. Hobbs is doing the union’s bidding by trying to kill ESAs. The race for Governor is close, and Democrats are seeking to rev up turnout by making the election about Donald Trump. GOP gubernatorial nominee Kari Lake hasn’t helped herself or her party by insisting that the 2020 election was stolen. Her election fraud claims put off many Republicans and independents and are a loser in the general election. A winning and unifying issue for Republicans this November is school choice.

Mr. DeSantis won in 2018 thanks in part to support from black mothers who were worried his Democratic opponent would take away their kids’ state scholarships. Ms. Lake has a chance to drive a similar message, and Ms. Hobbs has made herself vulnerable by telling parents they can’t be trusted with school choice.
Source: Wall Street Journal
Katie Hobbs primary day voting by N/A is licensed under ROSS D. FRANKLIN/ASSOCIATED PRESS N/A

A massive lawsuit has been filed in regards to the alleged mishandling of the midterm election by Maricopa County officials.

The Republican party of Arizona (RPAZ) has called on the chair of the Republican National Committee (RNC), Ronna McDaniel, to resign shortly after GOP lawmakers failed to win control of the Senate.

By Corinne Murdock | The operative whose political action committee (PAC) received $27 million from fallen crypto giant FTX also received over $1 million from committees for Senator Mark Kelly and governor-elect Katie Hobbs. The operative, Dacey Montoya, also served as the treasurer for these committees. Montoya has been behind numerous other political committees and PACs in