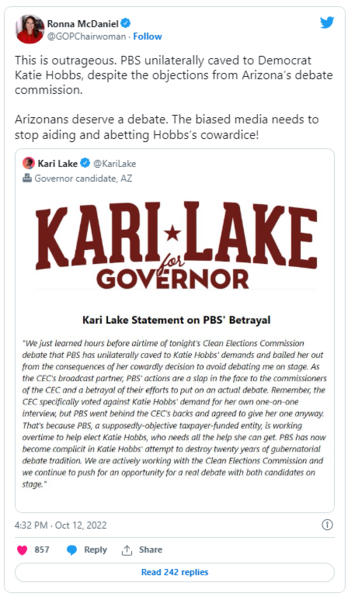 Ronna Tweet by N/A is licensed under AZ GOP N/A
Arizona PBS faced backlash Wednesday afternoon after it made the unilateral decision to host an event with Democrat gubernatorial candidate Katie Hobbs after Hobbs refused to participate in a debate against her Republican opponent.

The Arizona Citizens Clean Election Commission canceled a solo interview that was scheduled for Wednesday with Republican challenger Kari Lake after Arizona PBS announced the Hobbs interview. When a candidate in Arizona agrees to a debate but the opponent refuses to participate, the commission gives the candidate that opted to participate their own question and answer session in lieu of the debate since they were the one willing to stand up to scrutiny.

“This morning’s announcement came the day a longtime scheduled Gubernatorial event was to be taped and broadcast featuring candidate Kari Lake,” the Clean Elections Commission said in a statement. “This decision is disappointing, especially following the multiple attempts on behalf of all the partners involved in producing this year’s General Election debates, to organize a traditional Gubernatorial debate between the two candidates.”

“As a matter of state law and under the direction of its Commissioners, Clean Elections proceeded with its obligation to arrange a Q & A interview for candidates who agreed to debate but whose opponent elected not to participate, which is how the Q & A with candidate Kari Lake scheduled for tonight on Arizona PBS came to fruition,” the commission continued. “The Commission and Arizona PBS followed the same process during the 2022 and 2018 Gubernatorial primaries. Thus today’s announcement broke from our shared practice.”

The commission said that in light of Arizona PBS’s decision that they would “need to obtain additional information regarding the last-minute developments, the Commission will postpone tonight’s Q & A on Arizona PBS and will identify a new venue, partner, and date when the interview will be broadcast.”

“The Commission’s commitment and obligation under state law is to produce unbiased, fair opportunities for candidates to speak to voters,” the commission added. “We intend to make good on that commitment and our commitment to a transparent decision making process.”

Lake said in a statement that Arizona PBS “bailed [Hobbs] out from the consequences of her cowardly decision to avoid debating me on stage.”

“What an embarrassment for @azpbs,” said Jesse Hunt, communications director for the Republican Governors Association. “Working with the Arizona Democrat nominee for governor to blindside the Clean Elections Commission is pretty low, even by Arizona media standards Hobbs is scared to debate @KariLake and AZ PBS is here to help her.”