Are we better off today than we were before Democrats took control? 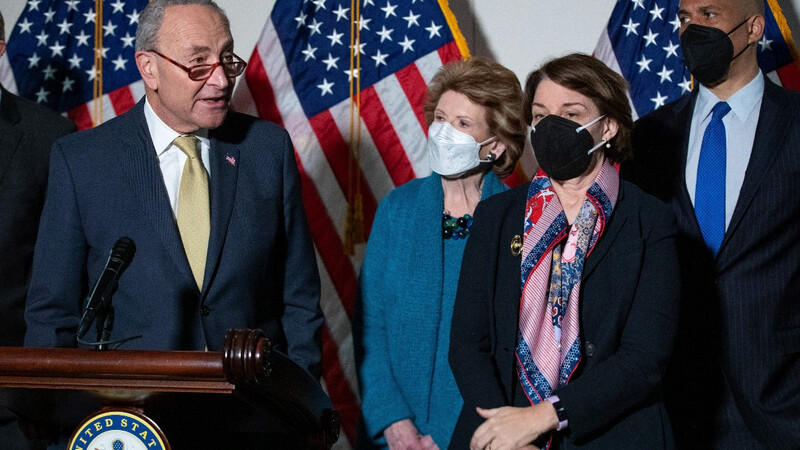 Democrats & Schumer by N/A is licensed under Getty Images N/A
Democrats have had their chance, and they failed

As of this weekend, we have one month left until the midterm elections and voting is already underway in some states. As we go to the ballot box and weigh our options, Americans should ask themselves a simple question: are we better off today than we were before Democrats took control of the presidency, Senate, and House in January 2021? By any measure, the answer is a resounding no. In Joe Biden’s America, groceries and gas are more expensive. Our streets and communities are less safe. Our southern border is wide open and deadly drugs are flooding our communities.

Senate Democrats like Mark Kelly in Arizona, Catherine Cortez Masto in Nevada, Raphael Warnock in Georgia, and Maggie Hassan in New Hampshire made Biden’s agenda possible and are up for re-election this November. Candidates like John Fetterman in Pennsylvania, Tim Ryan in Ohio, Mandela Barnes in Wisconsin, and Cheri Beasley in North Carolina are extremists who want to go to Washington, D.C. and make things even worse. We have tried nearly two years of one-party Democrat rule. It has been a failure on every front.

We’ve struggled through 40-year high inflation and a gas crisis straight out of the 1970’s. Buying bacon and eggs to feed your kids before school will cost you significantly more than it did before Biden took office. Filling up your car to drop them off might just break the bank. Let’s remember how we got here: Democrats passed a $1.9 trillion spending bill that economists warned would make inflation worse. This reckless spending led to skyrocketing costs and sent our economy into a recession. Democrats responded by raising taxes and hiring 87,000 new IRS agents to target middle-class American families. In other words, when Democrats control the presidency, Senate, and House, it’s the American people who pay the price.

Meanwhile, crime is skyrocketing in Democrat-run cities across the country, with many cities seeing murder rates even higher than last year. There’s a reason polls show that voters think Republicans handle crime better than Democrats by more than 20 points. And when would-be Democrat Senators like Mandela Barnes and John Fetterman advocate for releasing violent inmates and eliminating cash bail, they are sending a clear message: Democrats don’t care about your safety.

Perhaps above all, parents raising children will never forgive Biden and Democrats for working with far-left teachers’ unions to lock down schools. Anyone with common sense could see that keeping young kids away from the classroom would have negative effects, but Democrats didn’t care. Now, our kids are struggling with an unprecedented mental health crisis, teen suicide rates are up, and students are posting the lowest math and reading test scores in 30 years.

Everything is more expensive, our streets are less safe, and our kids have been left behind. But that isn’t enough for Democrats: they want to destroy the ties that bind us together. When the history books look back at Biden’s time in office, there will be pictures of his furious, incoherent speech in Philadelphia where he labeled Americans who disagree with him as fascists. No one will forget Biden spending 40 percent of his presidency on vacation as Americans canceled trips to pay for food. People who had to dig deep to pay for gas will remember that Democrats chose to shut down pipelines and unsuccessfully beg foreign countries for oil even as gas prices went through the roof.

Joe Biden isn’t up for election yet, but the far-left Democrats who make his agenda possible are. They are all on the hook for skyrocketing prices and violent crime. They all chose to hire 87,000 new IRS agents as Americans struggle to make ends meet but not Border Patrol agents as fentanyl floods our country. Their priorities are more in line with far-left extremists in Washington, D.C. than they are with the struggling citizens of our great country.

There’s a simple fix to these crises: in one month, vote Republican in Senate and House races across the country. Our party will cut costs, punish criminals, and protect our kids from the far-left’s science experiments. Republicans in office means a secure border, affordable food, and safe streets. We represent the freedom, security, and prosperity that made this country great.

Democrats have had their chance. They failed. In less than a month, vote Republican.

Ronna McDaniel (@GOPChairwoman) is Chairwoman of the Republican National Committee.