Kicking off the night was a total ethics disaster for the Arizona Republic and Arizona PBS moderators as they opened up the debate. Stacey Barchenger, a journalist at the AZ Republic, failed to disclose that she works for the same news outlet that Democrat candidate Kris Mayes spent many years as a journalist until Abraham Hamadeh called her out during the debate.

Stacey's assignment at the AZ Republic is to cover the Governor's race, begging the question why was she selected as a moderator for the Attorney General debate? Stacey also failed to ask Kris Mayes a single question the entire night.

Following this lack of transparency and lack of questioning for moderators, Hamadeh brought up Mayes' history with insider trading while working at the AZ Republic as a journalist.

Despite this documented fact, neither moderator pressed Kris Mayes on her history of insider trading. Not a single follow-up question or comment. While Capitol Times media covered the story when breaking years ago and highlighted Mayes’ apology for doing so. 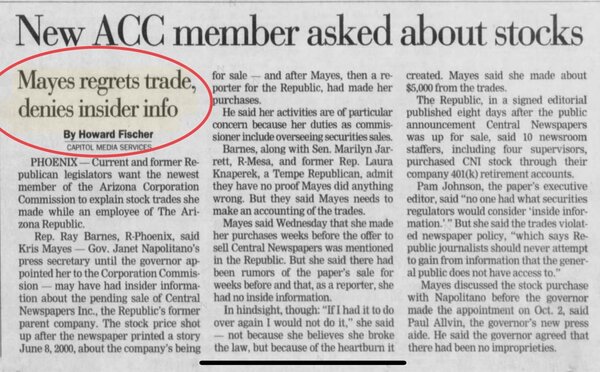 The most brazen spectacle of the debate was Mayes repeatedly mischaracterizing her previous role serving on the Corporation Commission as a judicial or legal position. Despite the position requiring no legal experience whatsoever. Did she receive any pushback from the moderators to clarify her statement? Absolutely, NONE.

As for the job of the moderator, they are tasked to push for truth and help inform the voters. Rather, they allowed Mayes to continuously filibuster her way through questions and talking points. Arizonans see through this and know that Mayes has never prosecuted a case in her life.

Furthermore, moderator Simon sparred with Hamadeh's position on abortion and went against journalist's general code of conduct, and took a position on the issue when asking a question. Boldly stating "to make it clear, you would defend and prosecute an unjust law?" (referencing abortion).

Abe responded clearly, “The law is the law,” he said. “I don’t want to make the law. That’s the job of the Legislature. I enforce the law, and I think that’s an important distinction between my opponent and myself.” Mayes repeatedly stated she would not enforce any abortion law on the books even if the law was declared constitutional or not by the courts. Mayes is also endorsed by Planned Parenthood, which requires endorsees to commit to defunding the police.

In a basic sense, Mayes declared herself a "super-legislator," someone willing to display raw judicial power to pick and choose what laws she deem worthy of enforcing. As usual, the moderators gave no pushback and moved on to another topic.

Both moderators struggled to appear unbiased as they employed a Democrat-friendly agenda and spin with the questions and prompts, targeting the Republican candidate far more with both moderators ignoring statements Kris Mayes defended during the debate. Yet, they simultaneously asked Abe to clarify his position multiple times. This included questions relating to the 2020 election and enforcement of abortion law.

It is the responsibility of the moderators to remain neutral, refrain from inserting their personal beliefs, and ask questions/press both sides. The moderators were clearly more dedicated to winning approval from their employers, peers, and catching a glimmer of  “fame” than maintaining their journalistic ethics and informing the voters.

Stacey Barchenger and Ted Simons failed in their duties to impartially oversee this debate and set a poor standard for the Arizona Republic and Arizona PBS. They should never be allowed to host a debate again. The people of Arizona deserve better.
# # #