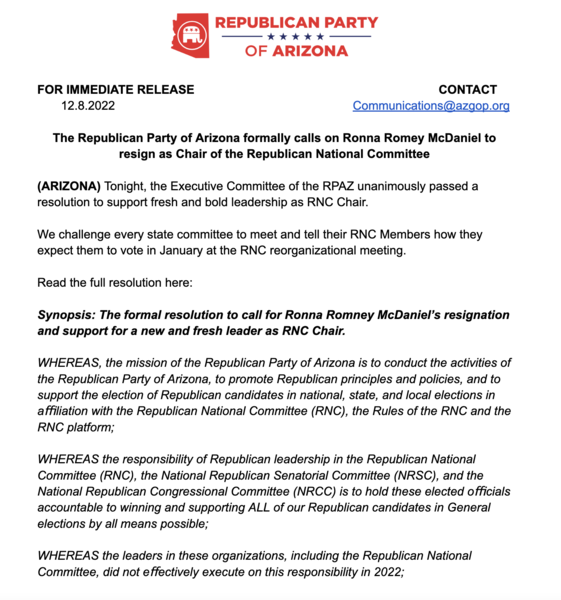 (ARIZONA) Tonight, the Executive Committee of the RPAZ unanimously passed a resolution to support fresh and bold leadership as RNC Chair.

We challenge every state committee to meet and tell their RNC Members how they expect them to vote in January at the RNC reorganizational meeting.

Synopsis: The formal resolution to call for Ronna Romney McDaniel’s resignation and support for a new and fresh leader as RNC Chair.

WHEREAS the leaders in these organizations, including the Republican National Committee, did not eﬀectively execute on this responsibility in 2022;

WHEREAS the ONLY pathway to presidential victory in 2024 is through Arizona;

WHEREAS the grassroots activists of the Republican Party of Arizona are committed to working hard in 2024 to deliver the state back into the Republican column for President.

WHEREAS Ronna Romney McDaniel publicly told members of the RNC that she would not seek another term;

THEREFORE BE IT RESOLVED, that the Executive Committee of the Republican Party of Arizona hereby formally calls on the resignation of Ronna Romney McDaniel as Chairwoman of the Republican National Committee and thanks her for her tireless work for the past 6 years;

BE IT FURTHER RESOLVED, that the Executive Committee of the Republican Party of Arizona calls on the members of the Republican National Committee to elect new and bold leadership in the January 2023 meeting in order to recast a courageous vision to contrast with the disastrous failing policies implemented by the Biden Administration.

A massive lawsuit has been filed in regards to the alleged mishandling of the midterm election by Maricopa County officials.

The Republican party of Arizona (RPAZ) has called on the chair of the Republican National Committee (RNC), Ronna McDaniel, to resign shortly after GOP lawmakers failed to win control of the Senate.

By Corinne Murdock | The operative whose political action committee (PAC) received $27 million from fallen crypto giant FTX also received over $1 million from committees for Senator Mark Kelly and governor-elect Katie Hobbs. The operative, Dacey Montoya, also served as the treasurer for these committees. Montoya has been behind numerous other political committees and PACs in